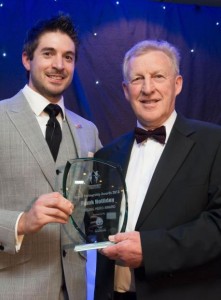 Frank, who was nominated for the 2013 West Midlands Sports Unsung Hero award and also won the county’s equivalent award, held many different roles at the Club, from Coach to Chairman, as he helped train hundreds of Spa children.

Frank retired from the club two years ago after being diagnosed with cancer but returned in recent months to watch his grandson, Finley, play.

“He particularly loved watching the under six, seven and eights work their way through the club.

“Frank was a remarkable person, he did an enormous amount of work in the community and the football Club was his love.”

Posting on Facebook, a Droitwich Spa Football Club spokesman said: “We are extremely sad to hear of the passing of Frank Holliday.

“Frank worked tirelessly hard for many years with Droitwich Spa Boys and Girls FC and was a frequent spectator at King Georges Playing Field (KGPF) at our home games.

“Frank was a huge factor in making Droitwich Spa Boys and Girls Football Club (DSBGFC) the success which it is today and his legacy will live on.

At todays Club AGM (28th June), a minutes silence was observed and discussions on plans to Honour Frank took place, the outcome of these discussions will be be advised over the coming weeks.

His son Simon said: “Dad spent his whole life trying to look after people and making sure everybody had the best chance in life. He would have been humbled by all the comments and memories shared. I am so proud to call him my dad and like him very proud to part of a wonderful town called Droitwich.”

His son Andy added: “We have been absolutely blown away by literally the hundreds of various messages we have received confirming what we knew already; what a ‘class act’ he really was.

“Something I learnt from my mate ‘Frankie’ was your life can and will be even more rewarding when you do things and put others first before yourself. I implore you to give it a go and see how it feels.”

The Whole Club are sad to have lost our “Mr Droitwich Spa Boys and Girls FC” His Legacy will carry on.