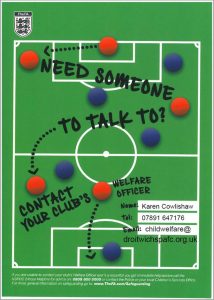 All current Droitwich Spa Boys & Girls Football Club   members who are regularly caring for, supervising, training or being in sole   charge of children and young people will be required to complete a CRB  Enhanced   Disclosure via The FA CRB Unit.  If there are concerns regarding the   appropriateness of an individual who is already involved or who has approached   us to become part of Droitwich Spa Boys & Girls Football Club guidance will   be sought from The Football Association. It is noted and accepted that The FA   will consider the relevance and significance of the information obtained via The   FA CRB Unit Enhanced Disclosure and that all decisions will be made in the best    interests of children and young people. It is accepted that The FA aims to   prevent people with a history of relevant and significant offending from having   contact with children or young people and the  opportunity to influence policies   or practice with children or young people. This is to prevent direct sexual or   physical harm to children and to minimise the risk of ‘grooming’ within   football.

The FA’s Safeguarding Children   Policy and Procedures are available via www.TheFA.com/Footballsafe